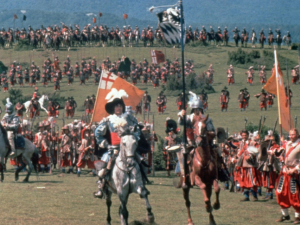 Still from Cromwell, a movie that takes major liberties with historical fact but has some great battle scenes. (Image source)

It’s not really accurate to say I failed at NaNoWriMo, since I never really signed up for the challenge. While word counts don’t motivate me at all – I can write crap fast if I push myself, but writing something worth keeping takes time – I did decide to use November as an excuse to sit down and write. And it seems to be working. I’ve managed to get a good start on a project I’ve been trying to write for more than twenty years: the Big Fat Historical Fantasy.

B.F.H.F. is set in the Stuart era, during the English Civil War. If you’re American, you’re probably not familiar with the Stuart era. (It’s the one right after the Tudor era.) I am an American, and by some bizarre chain of causes and conditions, I’m a big fan of the Stuart era. So how did this happen? And what on earth am I, an American, doing writing about this corner of English history?

END_OF_DOCUMENT_TOKEN_TO_BE_REPLACED

Hello, my long-unused blog! Is anyone still reading? I have to say that it’s been a relief to take a break from the twice-weekly schedule I had set for myself, and I’ve even come up with a story idea that I feel motivated about and isn’t like pulling teeth trying to write. It’s much too soon to talk about that, though. What I want to talk about now is Avengers: Endgame.

This discussion will drop HUGE spoilers for the movie, so click away now if you don’t want to see them.

END_OF_DOCUMENT_TOKEN_TO_BE_REPLACED

When I was a little girl I hacked into someone’s head for the first time. One of my teachers, maybe grade three or four, an old man who was mean and cranky and terrified all his students. I made him put down his chalk and spin around like a dancer. All the kids laughed and he just stood there wobbling and wondering what had happened. I was sure he had no idea there was a Type 1 in his classroom. I didn’t even laugh to give myself away, and I never told anyone, so I was sure I had gotten away with it.

I was arrogant then. I probably haven’t changed as much as I’d like to think.

END_OF_DOCUMENT_TOKEN_TO_BE_REPLACED 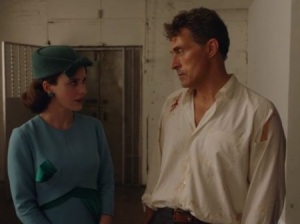 From The Marvelous Mrs. Maisel. (source)

There’s a scene in The Marvelous Mrs. Maisel where the title character visits a very eccentric artist who refuses to sell any of his paintings. In fact, he won’t even show his best painting. Midge manages to charm him, as she does almost everyone, and he takes her to the hidden room where he stores this amazing painting. It’s wonderful, she says. Why won’t he sell it, or at least give it to a museum? And why does he live this eccentric, lonely life, without a family? I put everything I have into that painting, he says. There’s nothing left.

I don’t want to sound as melodramatic as this, but I can understand what he’s saying. When I look back at the work that I dumped most of my soul into, it’s the Gbahn and Archipelago books. I wrote them ten years ago (though the pub date says 2013) and I feel like I’ve spun my wheels ever since. I have written some other things since then, some ideas I wanted to explore, but nothing really grabbed me by the throat and demanded to be written like those books. They sucked out my soul and there’s not much left.

Yes, I know. Still sounds melodramatic. I’ve enjoyed exploring the themes in my unpublished mystery novels, as well as the unpublished Refuge novel and the flash fiction I’ve posted here. But I think I’ve done all I can do with those. I’ve said what I wanted to say and I’m done. Pushing the point doesn’t result in good work, kind of like my attempts at the Big Fat Historical Fantasy and the week or so of NaNoWriMo I tried to do. Both felt like pulling teeth. I just didn’t care enough about the characters or the story to make it work. If my heart and soul aren’t in it, it’s not worth writing.

So I’m taking a leave from writing for the New Year. Kind of an anti-New Year’s Resolution, a resolution not to do something, which sounds much less anxiety-provoking. I’ve got one last entry in Stories from Refuge scheduled for tomorrow, and I might still do some poetry when it comes to me, but I won’t be pushing myself to follow this once-a-week schedule. I might even write some fiction if I get an idea, and if it doesn’t feel like pulling teeth.

Thanks so much to the followers who have been reading, and best of luck for your own writing. And happy New Year!

Yes, I’m back. I already talked to you about being a hacker, and why should I admit that if you’re arresting people, and then I find out that I got amnesty. You didn’t even do anything to make sure I couldn’t crack your systems again and read the last report. I got amnesty because my actions were against Government, but Carol hired me and she gets a criminal charge.

So that’s it, right? Like that woman from Civil said yesterday. Confess a crime like rioting or sabotaging bots or hacking into Government systems and you get to go free. Confess that you stole something from an ordinary person or bought drugs or beat someone up who wasn’t wearing a helmet and you get charged. Like all those other people had nothing to do with Government. Like we aren’t the way we are because you people were the way you were.

But here’s something you weren’t expecting. Let’s see how you handle this.

END_OF_DOCUMENT_TOKEN_TO_BE_REPLACED

You weren’t expecting me here,
were you?
Desert plant like me
among oak trees and pine,
growing up like I belong here
when you think I’m just
a strange visitor –
Well, so are you!

I work in Civil Council. I’m handling legal cases now, the ones that used to be arrested by Military and investigated by PsyOp, and we were just in charge of sentencing logistics. Now we’re handling everything, and we don’t know what to do.

That was an awfully unjust system, and we all knew it. I’m not the only one who kept old law books in my office, hiding them in holes dug out under the floor so no one found them when they came looking for paper to reuse. We didn’t understand half of what those books were talking about but we knew that’s what the law was supposed to be, that’s the way it was before we were locked down here a hundred years ago. That was the real refuge.

Still, it didn’t help us when the bottom fell out and two Councils were suddenly gone and we had to do everything ourselves.

END_OF_DOCUMENT_TOKEN_TO_BE_REPLACED

All content contained in this website is © Michelle M. Welch. Rights to portions have been reserved by the Bantam Dell Publishing Group/Penguin Random House.

Email me: m_welch (at) cox.net

Find me on Goodreads: my books, what I've been reading, and more.

Digital autographs for ebooks - or any book. Sends a free personalized PDF or Kindle AZW.